The multi-million naira main gate of the Federal University Ndufu-Alike Ikwo is now officially commissioned for public use.  The inauguration of the gate took place on Wednesday, November 30th, 2016. It marked yet another milestone in the administration of the Vice Chancellor, Prof. Chinedum Nwajiuba, whose zeal and commitment towards building a resilient and vibrant institution has known no bounds since his assumption of duty in February 2016. 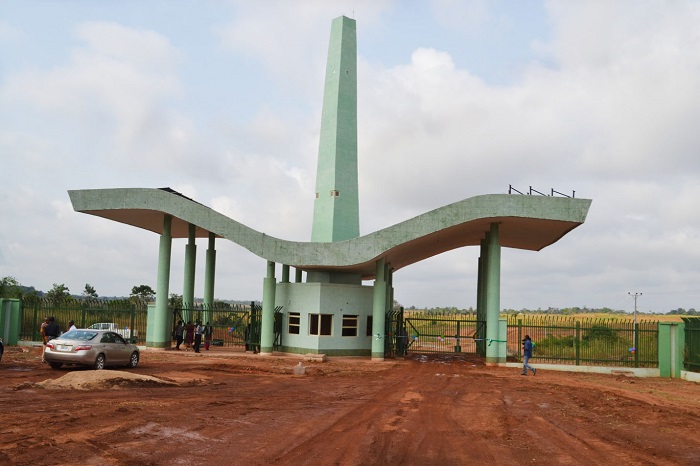 The gate which hitherto could not be used by the University community due to a pond and lack of a link road between the gate and the University campus was inaugurated by the Anglican Bishop of Ikwo Diocese, Rt. Rev. Ken Ifemene in union with the Vice Chancellor and other members of the University Management and staff. The Vice Chancellor who was visibly overwhelmed by the occasion called on the staff of the University to imbibe the culture of sacrifice and giving if the University is to achieve its vision.  The Professor of Agricultural Economics reiterated his commitment towards making the University great, stressing that he came to work and leave a worthy legacy. Prof. Nwajiuba further thanked those who contributed materials towards constructing a culvert over the pond and linking the university campus to its main gate, referring them as heroes and prayed that God should reward them accordingly. He specifically singled out the invaluable contributions of the Coordinator of Works, Engr. Nwali Eche and another staff of the University, Engr. Francis Odo, in making the dream of opening the gate a reality.  While also appreciating his Special Assistant on Linkages and Advancement, Mr. Chris Uwadoka, Ambassador Lawrence Nwuruku, Mr. Chinedu Ogah, Royal Salt Company and others for their material support, the Vice Chancellor called on others to emulate their philanthropic gestures. Dedicating the gate to God and for the service of humanity, Rt. Rev Ifemene prayed that the inauguration would signal a new beginning for the University, its staff and students and other stakeholders that would pass through the gate for any form of business. The Anglican clergyman further commended the doggedness of the Vice Chancellor in his sincere drive to make the University a true citadel of learning, and invoked divine protection, guidance and blessing on the entire University community. The highpoint of the event was a trek from the gate to the University permanent site led by the Vice Chancellor, Prof. Nwajiuba and Rt. Rev Ifemene and participated by the University Management and other members of the staff who sang sonorously to the glory of God for giving the Vice Chancellor the ability and initiative to take possession of the land (University gate) despite all odds.

VC, Prof. Nwajiuba (1st L) leading the long trek from the main gate to the University campus, permanent site on the newly graded road. The walk has lots of spiritual undertones